MOTHER TERESA TO BE CANONIZED ON 4th SEPTEMBER 2016 IN ROME 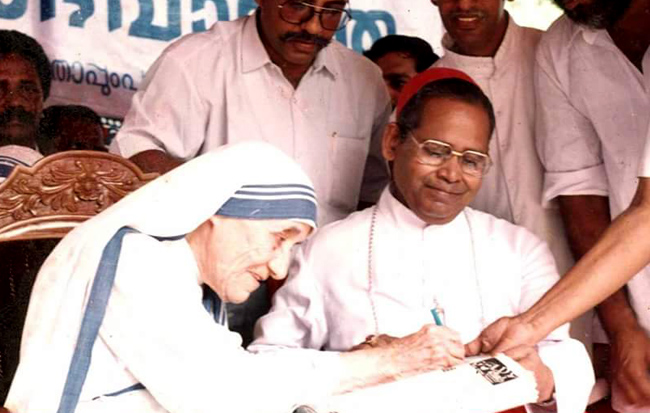 The canonization of Mother Teresa will be held on 4 September this year in Rome during the Sunday Mass celebrated as part of the Jubilee for workers and volunteers of mercy. The entire Missionaries of Charity family – Sisters, Brothers, Fathers, coworkers, Corpus Christi Movement for Priests, lay associates (Lay Missionaries of Charity and I Thirst Movement), volunteers, benefactors, friends of different faiths, and especially the poorest of the poor – rejoices and is grateful to Pope Francis for this significant event in its history and in the life of the Church during this Jubilee of Mercy.

It is providential that the approved miracle that occurred in Santos, Brazil in 2008 through the intercession of Blessed Teresa, was brought to the attention of the Postulation only in late 2013 and received approval in December 2015. Thus Mother Teresa’s canonization becomes a major event of the Jubilee of Mercy.

Even in her lifetime, Mother Teresa was an icon of God’s tender mercy, radiating the light of God’s love to so many through the works of mercy, both material and spiritual. From heaven she continues to fulfil her mission as she “lights the light of those in darkness on earth.” With her canonization, the Church presents her as a model and intercessor of those who, like her, “long to light the fire of love and peace throughout the world.” She can be taken as a patron saint especially for those who are most in need of God’s mercy.

By her example and through her intercession, may Mother Teresa inspire many to give their ‘hearts to love and their hands to serve’, starting with those closest to them. May we all continue to live and deepen our awareness of being in need of mercy and our willingness to extend mercy in our communities, in our families and in our service of the poor.

Mother Teresa is often considered to be one of the greatest humanitarians of our time. Born into an influential Albanian family, Mother Teresa left it all behind to serve the poor in India.  She founded the Missionaries of Charity, a religious congregation that’s active in 133 countries. The congregation operates dozens of orphanages, schools, soup kitchens and homes for the elderly and sick.

Mother Theresa is well known for her inspiring insights on topics like poverty, compassion and charity. Here are her ten of her most inspiring quotes:

1.      “Kind words can be short and easy to speak, but their echoes are truly endless.”

2.      “Be faithful in small things because it is in them that your strength lies.”

5.     “We think sometimes that poverty is only being hungry, naked and homeless. The poverty of being unwanted, unloved and uncared for is the greatest poverty. We must start in our own homes to remedy this kind of poverty.”

6.     “Please choose the way of peace…In the short term there may be winners and losers in this war that we all dread. But that never can, nor never will justify the suffering, pain and loss of life your weapons will cause.”

7.     “What we do is less than a drop in the ocean. But if it were missing, the ocean would lack something.”

8.     “Let us touch the dying, the poor, the lonely and the unwanted according to the graces we have received and let us not be ashamed or slow to do the humble work.”

9.     “Let us not be satisfied with just giving money. Money is not enough, money can be got, but they need your hearts to love them. So, spread your love everywhere you go.”

10.  “There must be a reason why some people can afford to live well. They must have worked for it. I only feel angry when I see waste. When I see people throwing away things that we could use.”