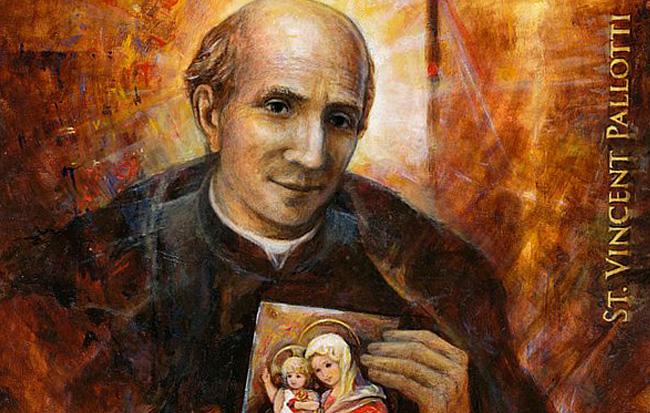 St. Vincent Pallotti, a Diocesan Priest of Rome, founded the Congregation of the Sisters of the Catholic Apostolate. Born on 21st April 1795, in Rome, he was a pious and zealous missionary from the very childhood. Ordained priest on May 16, 1818 in Rome, he had been Professor of Theology at the University of Sapienza (1818-1828). In his ministry St. Vincent Pallotti ardently endeavoured for the propagation of the Holy Catholic Faith by adopting different means.

The day, 9th January 1835, was a great one for Pallotti. While he was immersed in thanksgiving after celebrating the Holy Eucharist, he received the divine inspiration to start a Union of the Catholic Apostolate. In obedience to the Divine Will, he began to organize the Catholic Apostolate in collaboration with all the baptized - the Clergy, the Religious and the laity. The Apostolate was designed to renew faith among the Catholics, to re-kindle their two dimensional love and to spread it all over the world.

Revival of the Holy Catholic faith and re-kindling of true love through real charity being aimed at 'One shepherd and one flock', "Caritas Christi Urget Nos" (Love of Christ urges us) became the motto of this Apostolate. Diligence was the charism and the watchword as well of St. Vincent Pallotti to spread the kingdom of God through charitable and missionary apostolate in union with all members without distinction.

The Congregation was founded in the year 1837 in the house of Pia Casa di Carita, in Rome. And before long, Fr. Vincent Pallotti started an orphanage to protect the destitute damsels. He engaged dedicated women of care, concern and commitment to bring the children up in faith and love, to train them as good citizens, educate them to be better human beings and fortify them as true, firm believers.

The constitution of their Congregation was approved on November 16, 1886 and Mother Rafaella Castellani was elected the first Mother General of the Institute. In the year 1905 their Sisters began to consecrate themselves by simple vows. The Order then began to spread its apostolate to America, in the North as well as in the South, with Sisters engaged in every form of apostolate as per the needs of the time and place.

Vincent Pallotti became the precursor and prophet of the 19th century to involve the anointed clergy, the consecrated religious and the baptized lay in the apostolate to spread God's kingdom. Therefore, all the Pallottines are, by their very allegiance, obliged to strive to promote unity and Christ's charity in all simplicity and humility. By their unstinted efforts they aspire to achieve a situation where every person might live with dignity, pursuing one's own salvation and the salvation of others.

Now let us have a glance back at the early eighties. Rev. Mother Martha Mazzioti, the Superior of the Community at Rome, extended to His Excellency Rt. Rev. Dr. Joseph Kureethara, a warm welcome when the Bishop reached the Fumicino Airport in Rome on June 13, 1981. Signor Constanzio, a relative of Signorina Dottoressa Gaetana Padalino, who had made arrangements for the prelates stay at this Pallottine Convent, was waiting for His Excellency at the Airport. "I never dreamt that this first encounter with the Pallottine Sisters would be the beginning of a cordial relationship that would finally lead to the erection of their first House in India!", wrote His Excellency in his personal diary in later years.

Miss Gaetana Padalino used to help the Indian Sisters, Missionaries of the Incarnation, at Rome. When she came to India she made a visit to the St. Joseph's Convent of the Missionaries of the Incarnation at Nazareth, Cochin, where the Bishop met her. While there came the sad news that His Holiness Pope Paul VI who was a distant relative of hers had been called to his heavenly reward. She wanted to reach Rome before the funeral and so hurried back to Italy. Later she invited His Excellency to visit her and her mother and even sent the Air ticket for the Bishop.

It was Miss Gaetana who introduced Rt. Rev. Dr. Joseph Kureethara to the Pallottine Sisters. She wrote to His Excellency on January 17, 1980 "When I come to Cochin I must tell you about a Congregation." Miss Gaetana had helped a few candidates from Bombay and Mangalore to join the Pallottine Congregation and the Bishop had met them at the Novitiate House in Grottaferrata, Italy, in July 1981. She had advised two candidates, Seline and her sister Lucy Kattapuram from Kerala, to seek advice from the Bishop of Cochin regarding their visas.

Mother Martha and all the Sisters of the Convent extended to the Bishop their warm hospitality. The Mother General, Sr. Gemma was ill at that time and the Bishop met Mother Lilia Capretti, the Provincial. Together they made arrangements for a visit of the Pallottine Sisters of Cochin.

Mother Lilia Capretti, Sr. Agnes and Miss Gaetana Padalino reached Cochin in January 1983 and stayed at Shalom, Fort Cochin. The very next day they went round seeing some places at Amaravathy and Perumpadappu but the site just behind the Aquinas Pastoral Centre at Edacochin captured their fancy. Favourable reports reached Rome and the Mother General, Sr. Gemma, expressed her wish to start their first House in India at Cochin but after two months, on 13th March 1983, she passed away. On the day when their General Chapter started, Bishop Kureethara happened to be at the Generalate. His Excellency was almost sure that Sr. Lilia Cappretti would be the next General and just as the Bishop anticipated, it happened too.

After taking the decision to establish the first Convent of the Pallottine Sisters in India in the Diocese of Cochin, Rev. Fr. Reginaldo Bernini, Madre Bartolomea Capretti, the new Provincial, Sr. Carlisa Improta (Provincial Councillor), Sr. Jacinta Fernandez (from Mangalore), Sr. Selin Kattapuram (from Kottayam) and Miss Carmelina De Falco (a Pallottine Aggregate from Italy) arrived in Cochin, on November 19, 1984. Their landing in the Diocese was on the very next day after the Santa Cruz Cathedral was elevated to the dignity of a Basilica!

They were very warmly received and were accommodated at St. Agnes Convent, Pandikudy. On 26th November 1984 the Pallottine Sisters started their Convent (temporarily) at Thoppumpady. On that auspicious occasion, His Excellency celebrated the Holy Mass and blessed the Convent. The Decree granting permission to erect the Convent of the Pallottine Sisters in the Diocese was issued on 22nd January, 1985. What chanced was a cheerful coincidence that the issue of the decree befell on the blissful day of the 150th year of the Founding of the Pallottine Congregation.

His Excellency was ill during the first month of 1985 and was at the Kottiyam Holy Cross Hospital. Though discharged from the Hospital, the Bishop was almost confined to bed. The Bishop was so ailing that he could not even walk properly. Having sensed the yearning of the Sisters to have His Excellency himself mark the beginning and that too on the same happy day, the Bishop had no heart to disconcert their aspirations and thus disappoint them.

Interest and enthusiasm prevailed over the restraining and discouraging debilities. Delight at the divine donation to the diocese strengthened the spirit of the Bishop and albeit with the help and support of two priests, His Excellency reached the site. Thus, just as the Congregation wished and planned, the prelate himself blessed and laid the foundation stone for their first House in India. When the construction came to completion, the Convent of St. Vincent Pallotti was solemnly blessed and joyously inaugurated again by His Excellency Rt. Rev. Dr. Joseph Kureethara, on 22nd January 1987. Rev. Fr. John Thattumkal was appointed chaplain to the Convent.

The Pallottine Sisters engage themselves in the mission of teaching by giving formation to the members of the apostolate in the Church, imparting knowledge in schools and providing catechetical instructions. Their presence can be seen as animators in the Mission League, as tutors at Lux Mundi, assistants at the diocesan Pastoral Centre and as delegates of Family Apostolate. On the social sphere, they render immense help to the children of the deprived and the downtrodden, extend aid for the housing of the poor and deserving and provide nourishment to the little ones of poor families. The Pallottines pitch in to further the empowerment and promotion of women by offering opportunities to the have-nots at the Pallottine Garment Production Centre and accord training and work in stitching and tailoring.

The Congregation, according to the spirit of its Founder, wishes to carry out the message of the gospel to all and so they have been training the Sisters to be missionaries like Christ. Hence, the Sisters endeavour to animate love and charity with simplicity and humility and thus effect unity in the Church. The mission is to inspire, educate and thus enable Christians to live as the living limbs of the mystical body of Christ, the Church. Thus they contribute immensely to the accomplishment of the exhortation of the Lord Jesus Christ Himself - 'One shepherd and one flock'!