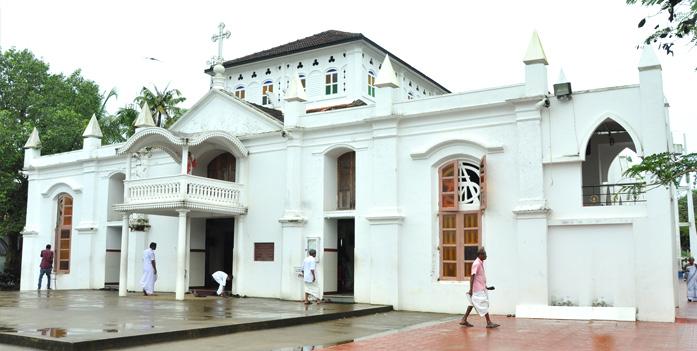 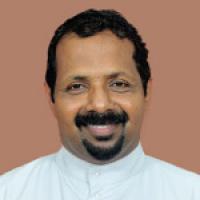 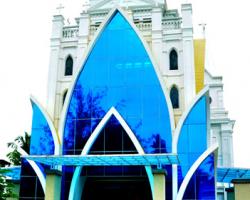 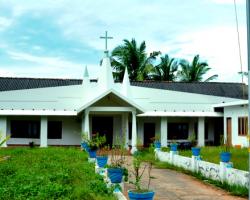 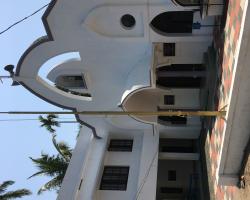 In the olden days the statues and pictures of saints used to be brought mainly from Spain and Portugal. These religious articles used to be brought to the land by voyage vessels. In those days it was not possible to book them in advance, but people from the church used to go to the vessels coming from Spain and Portugal and bargain for them. As in any bargaining, if the price was not satisfying to the officers the articles used to remain in the ship and if the climate was not favorable for sailing the ships used to remain at the sea shore for many days. In those days there was in vogue many stories about miracles taking place because of those stored religious articles. In the afore intended days there were no statues of St. Joseph in Kerala. Because of the sincere attempt of the Carmelite Fathers three statues of St, Joseph were prepared for some churches in South India. They were all life like statues nearly 6 feet in height and were all made from a mixture of a special clay. While packing it with straw, or transporting it, if a statue was damaged, the authorities in Spain would abandon the whole consignment with the damaged statue in Spain rather than carry three statue to India one of them damaged. But in the case of this consignment, they decided to carry all the three statues to India. The voyage was very smooth since the sea was very calm. Passing Kochi harbor the ship started her voyage to the South.

When it reached just the western part of the Kannamaly church the vessel encountered some engine trouble. The sailors and workers on board tried to repair it. After repairing the vessel it got ready to continue the trip. But now the vessel got grounded. All the sailors tried to float it back by changing its balance by shifting the luggage on board, but they could not. So they requested the help of the locals. Still the vessel would not move. They thought of unloading some goods including the broken statue of St. Joseph. When the damaged statue of St. Joseph was unloaded from the vessel it began to move. Again they tried to carry the statue back to the vessel, but they could not lift it from the sea shore. Locals also helped the sailors to lift the statue. Still nothing would move it. This miracle took place nearly one year after the first Holy Meal in honor of St. Joseph on 1905. The local devotees of St. Joseph desired very much to have the statue of St. Joseph for the Kannamaly church. So the devotees of St. Joseph requested the captain that the statue of St. Joseph be left in Kannamaly since there was no statue in Kanamaly and the saint himself wanted to stay in Kannamaly. The captain of the ship consented to the request of the local devotees. The parishners went to the Parish Priest, Fr. Suarez and he accompanied the people and examined the statue. Removing the straw he saw the face of the statue and covered it again with the straw. He told the people that after repairing the broken leg they should bless the statue and then install it in the new church. So the statue was kept in one corner of the old church. Kannamaly church was already damaged by the sea surge of 1905. The liturgical services were still in the same church.

Again on 1908 there was another sea surge. With that the old church was completely destroyed. In the place of the church what was left was only sea water. All the church articles were lost. The Statue of St. Anthony which was installed in the 2nd Church building and which was not wet by sea water was taken back from sea. So the 3rd church was blessed in the name of St. Anthony. In the place where the present church stays. the people constructed a new church which was made bamboo mat. All the church articles were collected and brought to this church including the statue of St. Joseph. Those days in many families of Kannamaly cattle rearing especially rearing cow was common. Almost all the cows were very badly affected by a diarrhea epidemic. Many of them died. When the people lost the only livelihood they had. they went to the church to share their pains with Rev. Fr. Suarez. One particular old lady cried bitterly and told Fr. Suarez, that the only cow which she had was badly affected by diarrhea. Father told her go to the church and pray to St. Joseph. While coming out of the church she saw some straw lying near the church. She took it home. When the sick cow saw her mentor she tossed her head. So she gave the straw to the cow. The old lady again busied herself in her household work. After some time, the cow, which was nearing dying before it eat the straw from the church, stood up and was completely cured. She was very happy. Seeing the miracle neighbors thought that she had given something special to the cow, and they asked her whether she had given something special to the cow. She told them that she had given nothing special only the straw which was used to cover the stature of St. Joseph. So people ran to the church and explained everything to Fr. Suarez. They also got some straw from the statue of St. Joseph and gave it to their cows also and they also got cured instantly. All the people of Kannamaly went to the church and prayed in front of the statue of St. Joseph of whose leg was broken. Rev. Fr. Suarez became disturbed by this overflowing visitation of the statue by the people he decided to have its broken leg repaired. Fr. Suarez raised funds for it easily and repaired the broken leg, had it painted and installed it in the church. He embraced the faithful to his heart as St. Joseph embraced child Jesus to his heart.