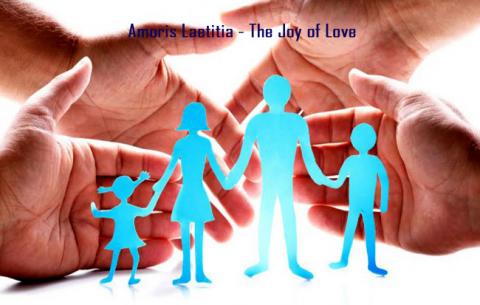 To clearly reaffirm not “the ideal” of the family, but its rich and complex reality, in order to reflect on love in the family together with the women and men of our time. With this purpose in mind, on 19 March, the Solemnity of St Joseph, Pope Francis signed the Post-synodal Apostolic Exhortation Amoris Laetitia. The highly anticipated document, presented in the Holy See Press Office on Friday morning, 8 April, speaks the language of experience, offering an open and profoundly positive outlook, which feeds not on abstractions or ideal projections, but on pastoral attention to reality. The text, laden with spiritual points and practical wisdom suitable to every couple and to those people who hope to build a family, was the fruit of practical collaboration with people who have experienced many years of family life.

The vast Exhortation is divided into nine chapters and more than 300 paragraphs which include the results of the two synods on the family convened by Pope Francis in 2014 and 2105. The concluding reports of the two conferences are largely cited, along with documents and teachings of his predecessors, and the Pontiff’s own catecheses on the family. As he has done previously in other circumstances, the Pope also drew from the contributions of various episcopal conferences – among them those of Kenya, Australia and Argentina – and quoted personages such as Martin Luther King and Erich Fromm, along with cues from the world of cinema, such as Francis’ nod to the film Babette’s Feast to explain the concept of truly free giving.

The prologue of Amoris Laetitia is especially meaningful, highlighting the complexity of the issues and the need for continued open discussion. It is in fact the fruit of the interventions of the Synod Fathers, which have composed a “multifaceted gem” for further reflection. In this regard the Pope makes clear that “not all discussions of doctrinal, moral or pastoral issues need to be settled by interventions of the magisterium”. Thus, for some issues, an individual country or region “can seek solutions better suited to its culture and sensitive to its traditions and local needs. For ‘cultures are in fact quite diverse and every general principle... needs to be inculturated, if it is to be respected and applied’”. But Francis seeks to invite an immediate escape from the sterile juxtaposition between fear of change and the pure and simple application of abstract rules. “The debates carried on in the media, in certain publications and even among the Church’s ministers”, he writes, “range from an immoderate desire for total change without sufficient reflection or grounding, to an attitude that would solve everything by applying general rules or deriving undue conclusions from particular theological considerations”.