Retreat for Priests by Pope Francis: Videos and Texts 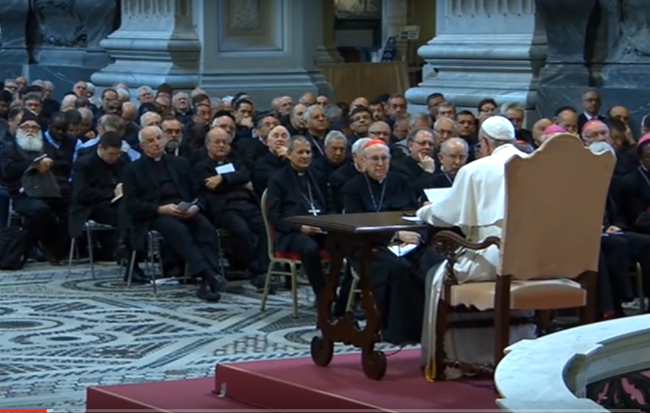 Pope Francis led a retreat for priests on Thursday, offering a series of three meditations on the theme of mercy. The retreat was part of the Jubilee of Priests, one of a series of special Jubilees for various groups within the Church during the Holy Year of Mercy.

Priests' hearts pierced by the love of God: Pope Francis

Pope Francis celebrated Holy Mass for the conclusion of the Jubilee for Priests on Friday, the Solemnity of the Most Sacred Heart of Jesus. In his homily for the feast, the Holy Father reflected on “two hearts: the Heart of the Good Shepherd” and the hearts of priests.

The contemplation of the Sacred Heart of Jesus, the Heart of the Good Shepherd, is an invitation to priests to reflect on the question, “Where is my heart directed?” Priestly ministry, the Pope said, is often caught up in “plans, projects, and activities.” While this is necessary, the Holy Father invited priests to consider that the Heart of Jesus is directed to two treasures: the Father and ourselves. Jesus’ days, he said, “were divided between prayer to the Father and encountering people.” Like Jesus, the priest should have his heart turned towards God and towards his brothers and sisters.

Pope Francis than offered three suggestions to help priests’ hearts “burn with the charity of the Good Shepherd”: seek out; include; and rejoice. Like the Good Shepherd who goes out to find the lost sheep, priests must not only “keep the doors open,” but actively go out to find those who are lost. Priests, too, must be inclusive, welcoming all. No one, the Pope said, must be excluded “from his heart, his prayer, or his smile.” Finally, the joy of Jesus “the Good Shepherd is not a joy for himself alone, but a joy for others and with others, the true joy of love” and this is “also the joy of the priest.”

The Holy Father concluded his homily by recalling the words of consecration, prayed by priests each day at the Mass: “This is My Body, which is given up for you.” This, he told the assembled priests, “This is the meaning of our life; with these words, in a real way we can daily renew the promises we made at our priestly ordination” — and he thanked them for saying “yes” to giving their lives “in union with Jesus.”