The Power Of Rosary Prayer 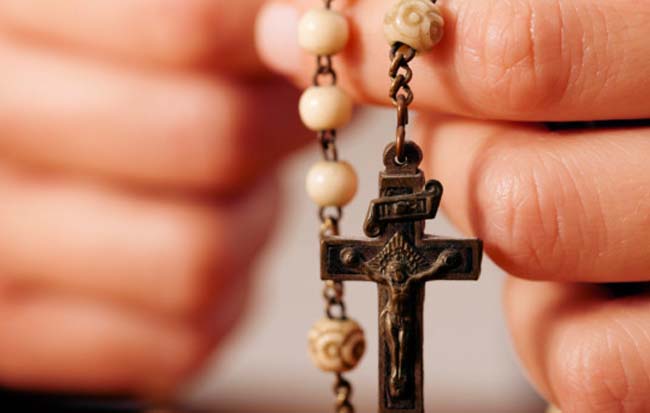 History gives us many examples of the strength of God’s people when they act as one, under His guidance. Unfortunately, it also gives us even more examples of how bad things can get when God’s flock is scattered. We celebrated one just this last Friday. On October 7, 1571, the world held its collective breath as a ragtag fleet under the command of an illegitimate Catholic prince faced the mightiest armada the Ottoman Muslim empire could put together. That there even was such a fleet was a miracle of sorts. Only the southern European, Catholic, countries, sent men and ships. The Protestant north sat back, heedless of Pope Pius’s entreaties, glad that the infidel papists were taking the brunt of the Islamic wrath.

But as the world held its breath, the Catholic world breathed a special prayer. Inspired by the Pope, thousands upon thousands of our ancestors prayed the Rosary, asking the Blessed Virgin Mary for protection and victory. Admiral Andrea Doria hung a banner of Our Lady of Guadalupe in his cabin. Entreaties rose from the throats of sailor and soldiers on both sides. Although neither side wanted battle in the Gulf of Patras, near Lepanto, they confronted each other and their guns rang out. It was a complete victory for the Christian fleet. Almost all the Turks were sunk or captured, and thousands of Christian galley slaves were freed. All attributed the unexpected triumph to the intercession of the Mother of God. A year later, the Pope ordered an annual celebration that has become, over the years, the Feast of the Holy Rosary. Although Christendom had not acted as one, the Catholic states generally had, and the result was a long period of peace on the waters of the Central Sea.

I tell this story because it is the most famous, and dramatic, example of the power of prayer, particularly the power of the Rosary. But understand that no prayer can “change God’s mind.” God’s will for us is fixed and immutable. He wills our good. What prayer does, in a way, is rip open the hard shell around our hearts so that God’s goodness and grace can flow into us, so that He can be our good shepherd, our strong wall of defense, our Friend. Prayer does not change God; prayer changes us.

“Nice sentiment, deacon. But if this God wants our good so much, why does He allow so much bad?” That’s the million dollar question, isn’t it? That’s one of the two big excuses for atheism–if God is good, why is there so much evil? Forget Lepanto–wouldn’t it have been better for everyone, including those thousands in the Twin Towers–for Mohammed to have died in Mecca or Medina before he started the Islamic movement? Wouldn’t it have been better for all if Hitler had died in the trenches of World War I, or if Lenin and Stalin had been stillborn? When will the king get fed up with the mistreatment of his servants, and send his army to destroy the wicked and burn down their city? It doesn’t happen. And so the atheist asks, “which is it: is it that God is not good, or that God is not God?”

I do not have the last word on the problem of evil. But I do believe the Word of God, and the Word of God tells us that it’s not our theology that is crippled. It’s our anthropology. We don’t understand God because we don’t understand ourselves. God, in love, made us in His own image and likeness. That means He gave us intellect like His and free will like His. He wants us to want Him, to find our ultimate Good in God. He will not force us to love Him. He will not drag us kicking and screaming into the banquet of life. That means his forbearance with sinners is almost limitless. He kept giving me chances to repent of my sins, and continues to do so with all of us. So He didn’t kill Diocletian, or Attila, or Frederick, Robespierre, Bismarck, Stalin, Hitler, Idi Amin or any of the other murderous persecutors of the Church early in their rampages. God refuses to treat us as slaves, to deny the operation of our free will, to deny our rightful place as images and likenesses of Himself. Indeed, He even willed that His only begotten Son would die a shameful death, so that the veil of the Temple and the very heavens themselves might be ripped open, letting loose an infinite torrent of loving grace.

And so, on our part, we may at many junctures of our lives have to stare at evil, grinning in our face and telling us to bow down and admit defeat, to accept the triumph of the bad. In that hour, filled with the grace of God, it remains for us to have confidence in the One who strengthens us, to join hands with Hananiah, Azariah and Misael, standing outside the fiery furnace as they contemplated their own horrible deaths. With them, may we have the courage to look confidently on the face of our persecutor and say, “I don’t know if I will be rescued from your furnace or not, but I will not bow down before your idol.”

Yes, God gives us an occasional win. After all, despite all the advertising and hooplah, NBC had to cancel The Playboy Club, because Christians told them they crossed the line. We may even make the administration back down and not make Catholic institutions pay for abortion-causing drugs in their health plans. But in everything, we can have confidence. Whether we win or lose the little battles, we can still use our beads, or just our fingers and toes, and daily pray the prayer of Lepanto, the Holy Rosary. It’s a valuable discipline. Each week we review twice the mysteries of Jesus and Mary, from the Incarnation to the Coronation of the Queen Mother in heaven. Each week we walk the via crucis with Jesus and Mary, and hear Christ pray “Father, forgive them, for they know not what they do.” Each week we can pray 42 times, “Thy will be done,” as Jesus did in the garden, as Mary did at Nazareth. Each week we glorify the Trinity the same number of times, and profess our faith sevenfold. And each week we ask Mary, 371 times, to pray for us who so desperately need her prayers, both in this hour and in our last.