Our Lady of Life Church, Mattanchery 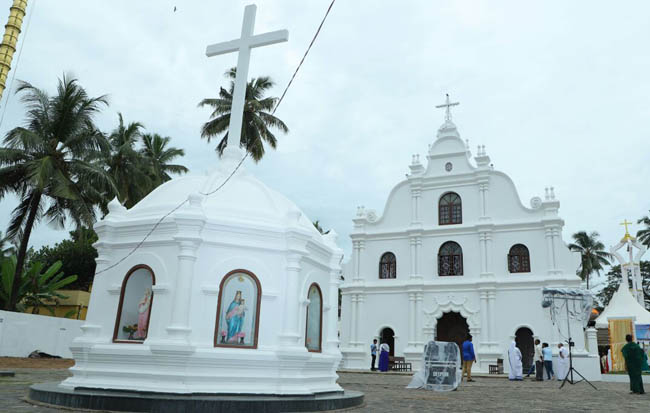 A journey through the paths of the Coonan Cross at Mattanchery leads us to the depths of the historical events that had taken in the land of Merchants and Missionaries.

In those days town of Cochin was separated into two parts. The eastern portion was known as the "The Cherry of Mathan" - Mattanchery and the western was Fort Cochi. The church at Mattanchery dedicated to Our Lady of Life was used by the Catholics other Christians build a separate church. In spite of this scandous events that followed later on, the majority of St. Thomas Christians who joined the Catholic Church, remained faithful in their obedience to the Roman Pontiff. The Church of Our Lady of Life and Coonan Cross always remained with the Latin Christians. As the priest of these former St. Thomas Christians did not have any proper training in Catholic Doctrine and Latin liturgy. The Portuguese started in Cochin and Crangannore. In 1653, an Augustenian Arch Bishop Don Alexis Menezes of Goa convoked the synod of Diamper (Udayamperoor). This Synod was meant, not to Latinize the old Christians but rather to correct their doctrined errors and evil practices. The Syro - Chaldiac form of worship was almost entirely preserved, except some changes which were found to be most necessary. A large number of St. Thomas Christians were quite against the changes done at the synod. It was resolved, not again to entrust the care of the Thomas Christians to an oriental Bishop. By a brief dated 20th December 1559, Pope Clement VIII reduced the see of Angamaly to a Bishopric, removed it from the Chaldean Patriarchate and made it Suffragon to Goa. Afterwards Pope Paul V, by his Bull dated Dec. 22nd 1608 restored the see to the grade of an Arch Bishopric and by another bull dated Dec. 3rd 1609, transferred to Crangannore.

Thus started the line of Portuguese Arch Bishops following the Latin rite, who ruled over St. Thomas Christians. Thus there came a hereditary Arch Deacon of the Syrian Christians and the European Arch Bishop of the Diocese.

The things began to be much worse when Thomas became the Arch Deacon. Then the Arch Bishop was Gracia this Arch Deacon is described by the contemporary writers as a proud and turbulent mischief maker the Arch Deacon could not have recourse to the Chaldean Patriarch who must have any influence and at last the Arch Deacon went beyond this allegiance to Rome and wrote secretly to the Nestorian Patriarch of Babylon, to the Jacobite Patriarch Antioch and to the Coptic Patriarch of Alexandria at Cairo, asking each of them to send a Bishop to the Thomas Christians.

In response to the Arch Deacon's letter the Jacobite Patriarch at Antioch, Ignatious XXII sent a Bishop named Ahatulla. In India he took the name Ignatius with the title of Patriarch. As he was an intruder the Portuguese authorities at Mailapur placed Ahatulla on the board of the ship which was sailing for Goa and this fleet with him on board touched upon Cochin and then shipped him off to Goa. While under the Arch Deacon of Angamaly about 20,000 Syrians has gathered at Mattanchery to rescue Ahatulla from the Portuguese. The Captain of Cochin closed the gates of the town and maintained the walls for defence and he maintained until the fleet sailed from Cochin.

The Syrian Christians were deeply angered because their Bishop was interrupted on his way to them. They professed to believe that Ahatulla was sent to them by the Pope. The angry Christians went to the Church at Mattanchery on Friday 3rd 1653 and there they swore an Oath on the leaning Cross that hence forth they would never be under the Jesuits. As the crowd was so numerous and so eager long ropes were attached to the cross and this held on the rope and took the Oath. This event is known as the "OATH OF THE COONAN CROSS".

Our Lady of Life church