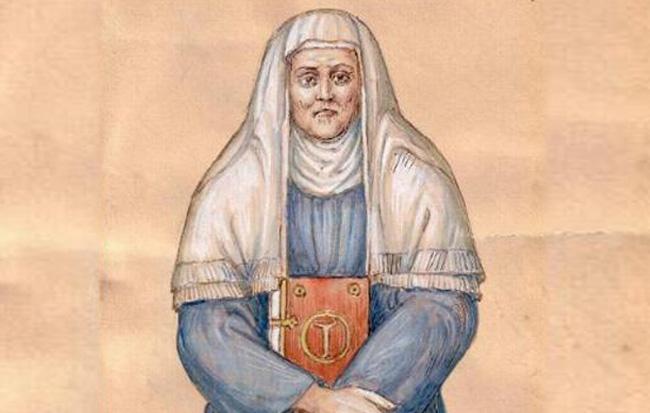 The Congregation of the Oblate Hospitaler Franciscan Sisters was founded at Florence in Italy in 1288. It was started by the hard work of a humble widow, called Monna Tessa, who was, in fact, a servant at the house of Folco Portinari, a rich man. The angelic lady, Beatrix, a friend of Dante, was educated by Monna. She responded generously to the divine inspiration and emptied her life for others. When she was any sick bed assisting the confined, she was enjoying a warmth as if she were touching Jesus Himself on the Eucharistic Altar. And at such times the Gospel passage used to strike her mind was, "when I was sick, and you visited me".

Her desire to establish an institute for medical assistance was fulfilled in Florence. Because of the ardent services she rendered to the sick and the poor, she was acclaimed by the people as the first nurse of Italy. In the beginning there were only 12 beds and 12 patients. Afterwards the number of patients and beds increased and that made her establish a hospital. This huge building for medical assistance is called Villa Monna Tessa. Now it is under the control of the Government but the Oblates render their services at the Institute still.

The Mother General Sr. Bernadina with her secretary and accompanied by four Indian Sisters came to India and reached Cochin in 1975. Rt. Rev. Dr. Joseph Kureethara invited them to erect a Convent here at Paandikudy. On 21st January, 1980, in memory of the martyr St. Agnes, His Excellency laid the foundation stone for a dispensary as a charitable institute for the poor. After that in 1982 the St. Agnes Convent was established for the formation of aspirants.

On Good Friday, March 28, 1975, Rev. Mother Rosa Caterini, the Mother General of the Dominican Sisters, Prato, Italy, took Rev. Dr. Joseph Kureethara by car to the city of Florence. The Mother General suggested that he visit some Indian Sisters at Piasa Careggi but the Rev. Father declined, saying he was not interested as he did not know any one of them. Still when the Rev. Mother insisted, Rev Dr. Joseph Kureethara could not but obligingly comply.

Thus they reached the Convent of the Oblate Hospitaler Sisters at about noon. Mother Rosa had already informed the Oblate Sisters of their visit. So Rev. Mother Bernardina Baroni and another Sister met them at their small parlour. The season clearly was the hopeful spring but perhaps befitting the dismal day the visit befell, the reception they had had a wintry air about it. And Rev. Dr. Kureethara could very well sense and discern the subtle change in the element of the convent atmosphere.

The Mother General's reservation on the visit of an Indian priest especially with a view to meeting the compatriots could easily be conceived. The Rev. Father himself had been well aware of the adverse reports on the so called 'nun-running' in the press both in India and abroad. He had even purused a work written by a one-time lady tutor in Italian to the Indian aspirants.

The particular lady tutor had occasion to reach Kerala with a couple of candidates who could not accommodate themselves to the new surroundings and perhaps to be more true, to the challenging calling of consecrated life. During the trip the tutor could collect only poor and pernicious impressions on the people and the place, especially priests. The impressions were adverse and particularly so on one who had arranged some candidates for the Congregation in Italy from Changanacherry.

Fr. Joseph Kureethara was well aware of the fact that Congregations' care and concern for the expatriate girls had made the various Orders form rather stringent rules and regulations on visits to the convents. That had provoked some, even a few of the clergy who perhaps wanted easy access. Such had contributed a lot to the adverse publicity and there were even wicked write-ups by some such anointed in Rome.

Rev. Dr. Joseph Kureethara disclosed to Mother Bernardina Baroni the steps taken by the Kerala Bishops Conference and even by the Catholic Bishops' Conference of India. The Rev. Father enlightened the Mother General that any Congregation taking Indian candidates abroad would first have to set up their House in India and that only after a formation of at least two years' duration in India itself would the Congregation be allowed to take their candidates out.

Meanwhile Rev. Dr. Joseph Kureethara came to realise one thing and felt really sad - the Indian Sisters had not been able to visit their parents for seven years after they had left home! Mother Bernardina explained that they could not be sent home on visit as they did not know where the accompanying Italian Sisters could stay. Then and there the Rev. Father promised all help possible and also gave assurence that they could be accommodated at the Convent of the Canossian Sisters in Fort Cochin. The Mother General seemed obviously relieved at and immensely

They invited the Rev. Father and Mother Rosa to lunch and thereafter were given permission to meet all the Indian Sisters who were there at the time. When the Sisters appeared, all of them requested the Rev. Father to put in a word for them so that they could go home and visit their kith and kin. Once back in Cochin the Rev. Father wrote to Mother Bernardina to pay a visit to Cochin together with the seven Sisters who had already made their first profession in February 1973.

On July 20, 1975, Mother Bernardina Baroni and the Secretary General, Sr. Eliana Faggioli arrived in Cochin with four Indian Sisters. The native Sisters were taken home and Rev. Dr. Joseph Kureethara brought the Italians to St. Mary's Convent, Fort Cochin. The Malayalaee Sisters came back later and took the Italian Superiors to visit their homes and on August 6, 1975, they all returned to Italy.

Immensely pleased with the reception and the treatment they had, the Sisters wanted so much to present Rev. Dr. Joseph Kureethara with a gift which the Rev. Father courteously but firmly declined. Yet, before their departure on August 6, 1975, they presented to him a small parcel, claiming it was just a packet of sweets and asking him to open it only after they left.

Later upon opening the packet, the gift turned out to be a wrist watch with a red border-line and that really alarmed the Rev. Father. Rumours were rife in those days that Rev. Dr. Joseph Kureethara was one of the candidates to be the shepherd to the See of Cochin. And so it chanced that the Holy Father, Pope Paul VI, had already signed the document on July 19, 1975 although consent of the designate was sought only on 5th of the following September.

A couple of weeks later, the Bishop designate introduced Rev. Fr. Reginaldo Bernini to Rev. Mother Bernardini and made arrangements for Fr. Bernini to visit the Mother at Pizza Caregi. Rev. Dr. Joseph Kureethara, Rev. Fr. Reginaldo Bernini and Madre Bernardina met at "Lo Strettoio" a famous restuarant on the side of a hill near the city of Florence and among them laid further plans regarding the opening of a House in India.

Madre Bernardina Baroni, Sr. Eliana Faggioli and Fr. Reginaldo Bernini reached Cochin three years later on December 7, 1979 and stayed at the Rosary Convent, Palluruthy. Search for a suitable place started straight away and in due course a property consisting of about three acres was bought at Paandikudy. Immediately after the acquisition of the property, His Excellency, Rt. Rev. Dr. Joseph Kureethara, blessed the foundation stone for the convent of the new Community. Madre Bernadina, Sr. Eliana, Fr. Bernini and His Excellency together laid the foundation stone on the New Year's Day in 1980.

On November 27, 1980 the new Mother General Madre Eliana Faggioli and Sr. Fedele landed in Cochin. They stayed briefly, for about a week, at the Rosary Convent. Then they shifted to a building belonging to Diocese of Cochin, at the Catholic Centre, Thoppumpady and a month later Sr. Flora and Sr. Elizabeth joined them. Rev. Fr. Ignatius Kavalakkal who was then staying in another building at the Catholic Centre, was appointed Chaplain to the convent. Sr. Flora and Sr. Elizabeth returned to Italy on January 2, 1981 but Sr. Alessia and Sr. Theresa arrived on the same day.

The construction of a dispensary building was almost complete and when Madre Bernardina Baroni and Signor Silvestrini arrived, the blessing and inauguration of the dispensary building, to be temporarily used as convent, was accomplished on March 2, 1981. A week later, on 10th March, the Sisters shifted from Thoppumpady to their dispensary building at Paandikudy. Madre Eliana Faggoli was elected Mother General in April that year and in the following month the dispensary was inaugurated.

The first native baby to the Congregation, their first candidate, joined the Community in April 1982 and in the meantime the construction of St. Agnes Convent was completed. The new House was blessed on October 11, 1982 and the Sisters moved into their new abode a fortnight later, on 27th. Fr. Bernini, Madre Eliana, Madre Bernardina were all present at the inauguration. On 2nd May, 1991, Rt. Rev. Dr. Joseph Kureethara inaugurated one more House for the Congregation, this as Novitiate House, in the same compound.

The principal purpose of the Congregation includes the sanctification of its members and the witnessing of the love of the Father among the brethren. In imitation of St. Francis, the gospel man, who, like the angels on Jacob's ladder either went up to God or came down to the neighbour, the Oblates must seek God above all else and seek solely God. They should join contemplation by which they cleave to God heart and mind. Likewise they cleave to apostolic love by which they endeavour to be associated with the work of redemption and spread the kingdom of God.