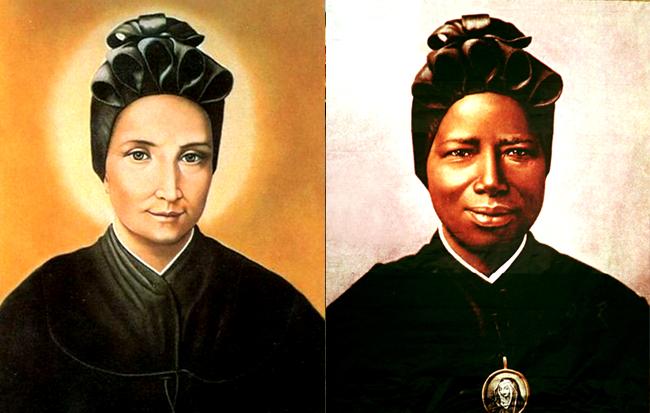 On March 1, 1774, Magdalene of Canossa, the Foundress of the Canossian Daughters of Charity, was born in Verona (Italy) as the daughter of Marquis Octavis and Marchioness Teresa. S. Szluha. At the age of five, having lost her father and mother having got re-married, her Uncle Jerome brought her up. From her very child- hood she turned to Our Lady, the Mother of Sorrows and at the age of 18, her desire was to be a cloistered nun of St. Teresa. Realising that she was not called to the cloistered life and guided by a holy priest, Don Libera, she turned to serving the poor.

The French Revolution and the men of her time were preaching equality, fraternity and liberty but practising oppression, violence and guillotine - a turbulent time of total tumult on the socio-spiritual sphere. Realising that Jesus was not being loved because He was not known, she set out to show Jesus to the people through work of charity - catecheses and hospital visits.

The French Revolution and the siege of Verona and the neighbouring parts by Napoleon Bonapart drove the country into panic. The hospitals presented a pitiable picture with the wounded in the war. Women and young girls were wearily on the watch out for two legged werewolves. Orphans of war roamed the streets of Verona. The flood of refugees further complicated the situation. Adding fuel to the fire, the Jacobian ideas spread by the French and upheld by the local patriots posed a great threat to the fine Catholic traditions of the place. In short, Verona too shared the destiny of all other Italian cities liberated by the French.

Magdalene, having lost her father at the age of five and deserted by her own mother after re-marriage knew well, what orphanage really meant. Moved to pity, she was restless until she could find some solution to ease at least slightly the sufferings of the ill-fated around. Napoleon who had ousted all Religious Orders passed through Verona in 1805. Magdalene boldly asked him for the suppressed monastery of the Augustinian Nuns at Verona. Finding the ideal of the young marchioness good, he approved, praised her plan and handed over the house. This particular house belonged to the parish of Sanzeno, Verona and thus became the cradle of the Institute of the Daughters of Charity. Magdalene gathered a few abandoned children and entrusted them to a friend who had the same impulse and vision. As days rolled by, the idea of serving Christ in the poor and needy became clearer to her.

Magdalene had to wait a very long time before she could start her mission. Meanwhile the palace servants, the poor knocking at her door, the children in the streets and poor women in moral danger became the daily objects of her concern and affection. For the abandoned little girls, Magdalene prepared a small home. She thought of new means to bring solace to the ever so many suffering souls. Thus Magdalene of Canossa started the Canossian Daughters of Charity in Verona, Italy, in May 1808.

Pope Leo XII gave the Community official recognition in 1828. Magdalene died on the April 10, 1835 and was canonized by Pope John Paul II on 2nd October, 1988. Today the Order has spread its cool foliage to all the continents. About 4000 Sisters are at work in the vineyard, making Jesus known and loved through their ministries of education, evangelisation, pastoral care of the sick and spiritual exercises.

At the request of Msgr. Lewis Ambrose, the Prefect Apostolic of Hong Kong, four Sisters and two Novices set out for Hong Kong on 26th February 1869. From Hong Kong, new Canossian Missions sprang up in Hankow, Macao, Cochin, Belgaum, Kin Kia Kan, Kulpa and Singapore before the close of the 19th century. It so chanced that a Portuguese Priest, Msgr. Joao Gomes Fereira who was working in China as Superior of the Missions in Timor, was nominated Bishop of Cochin in 1886. He requested Bishop Medeiros of Macao and the Superior Mother Mary Stella in Hong Kong to allow the Canossian Sisters to come to Cochin.

Mother Ida Belgieri from Monza, Italy, Sr. Marcelline Besttetti from Milan, Sr. Myriam Winter from Ireland and two Novices, Louisa Cordeiro and Maria Incarnacao from Macao were selected for Cochin. They left Hong Kong by steamer on October 30, 1889 but got caught up in a terrific typhoon and were in real danger of sudden and sure ship wreck. Everyone was at prayer in earnest and getting prepared to face the inevitable. One of the Sisters gave the Captain of the vessel a medal of St. Benedict and asked him to throw it into the sea. The captain did so and all of a sudden the sea became calm, enabling the vessel reach the port of Saigon safe. After repairs in Singapore they set sail to Ceylon (Sri Lanka), from where they finally reached Cochin on 24th November, 1889.

Cochin had become a Catholic town during the period of the Portuguese (1500-1663) with a lot of churches, convents and charitable institutions. Later the Dutch Calvinists destroyed almost everything that was Catholic except the St. Francis Assisi Church and Santa Cruz Cathedral which they used for military purposes. At the arrival of the British (1795), they destroyed also the Santa Cruz Cathedral and the St. Francis Assisi Church was converted to an Anglican Church, leaving not a single Catholic institution in the area. The Portuguese Bishops could not enter the city of Cochin and so the Holy See had to annex the Diocese of Cochin to the Vicariate of Verapoly for forty-eight years (1838-1886).

The Vicar Apostolic of Verapoly obtained special permission from the British Government to start two Catholic schools in Cochin for which the Government donated a piece of property and the faithful contributed property and money. St. Xavier's Church, St. Joseph's College (for boys) and St. Mary's Girls' School Fort Cochin were started. In 1886 His Holiness Pope Leo XIII, by an agreement with the King of Portugal, released the Diocese of Cochin from the Vicariate of Verapoly and then the St. Francis Xavier's Church and the two schools were handed over to the Bishop of Cochin.

The missionary moves initiated by the Canossian Sisters were the institution of English School, Orphanage, Boarding, Religious instruction, family and hospital visits and pastoral work. They took over the two L.P. schools. The first local candidate Miss Anna Even joined the Canossians on 13th June 1890. Another group of Sisters arrived from Italy in May 1892 which led to the growth of the Congregation here. This paved the way for the opening of another convent at Alleppey and a third one at Belgaum in 1892. It was in fact Mother Ida Belgeri, Superior of St. Mary's Convent Cochin, who promoted the Rosary devotion to Our Lady of Pompei. To a great extent, this devotion has influenced the faith formation of the people of this area.

On June 4, 1923, the Canossa Convent was started in Vypeen with Mother Letizia Grassi as Superior and then in 1943 Fatima Girl's High School was started in Fort Cochin. A Babies' home named 'Canossa Creche' was started by the Sisters at the house on the Western side of the Bishop's House in 1960. In 1964 St. Mary's Orphanage was moved to an old building but later shifted to the present location in 1968. Rev. Mother Virginia Vismara started a Social Work Centre on the northern side of St. Mary's Convent in an old building and subsequently a three-storeyed 'Home Centre' was erected there in 1967.

With a group of five Sisters, the new branch Fatima Convent was started in Fort Cochin on 21st May, 1982 and the first of September, 1983 witnessed its canonical erection. Solemn blessing of the Convent and Orphanage was done by Bishop Joseph Kureethara in 1986. On October 2, 1988, the Foundress, Magdalene of Canossa was proclaimed a saint by Pope John Paul II and the celebration over the event in Cochin was a few days later on 8th October. A statue of St. Magdalene was blessed at the shrine Piazzo Canossa near the Cathedral. The centenary celebrations in connection with the establishment of the Community in the country was inaugurated on 26th November 1988 and was concluded on December 10, 1989.

The Canossian Convent at Vypeen was established through the efforts of H.E. Dom Jose Bento Martin Rebeiro, on 4th June 1923. The purpose was to entrust the charge of the schools and assistance at pastoral work in the parish. The Convent, started in a two-room hut with thatched roof, bamboo mat wall and mud floor was later moved to an old masonry building with tiled roof. The Convent is on the site of the bugalow of a domiciled Portuguese, whose daughter later joined the Canossians. That old bugalow was demolished and the new big, beautiful building was blessed on September 17, 1986. The spacious structure stands facing the Cochin Port estuary. At this Convent on the scenic spot, the Canossians also run an orphanage for girls - Nirmal Home.

The foundation stone for the present English medium 'Lady of Hope´ Anglo-Indian School was laid by His Excellency Dr. Joseph Kureethara on 28th August 1988. Later when the structure was completed, the much sought after educational edifice entertaining instruction in English medium in Vypeen was solemnly blessed and ceremoniously inaugurated by His Excellecny, Dr. Peter Chenaparambil, Bishop of Alleppey on July 31, 1989. Forty years after the establishment of this Elementary School way back, the medium of instruction had changed from Portuguese to English.

Across the channel in Fort Cochin, the Sisters realised it was almost impossible to conduct two schools within a small compound near the Santa Cruz Cathedral. The Sisters therefore purchased a property along the eastern side and remodelled the coir factory there into a large auditorium - St. Mary's Auditorium. They then shifted the Fatima Girls' High School to the newly built buildings at the new premises. St. Mary's Orphanage was also shifted to this property. The Community of the Canossian Sisters there was erected as a convent - Fatima Convent on September 1, 1983.

The new building of St. Mary's English U.P. School was inaugurated at the new site on 8thOctober, 1983. The foundation of this building was laid on May 8, 1981. The foundation stone of the chapel for the orphanage was laid on the 26th May, 1982 and it was completed and blessed on December 7, 1983. The centenary of the Canossian presence in Cochin Diocese was celebrated at the Fatima Convent premises in the year 1989.

Motivated by the charism of the "Greatest Love", the Community tries to alleviate sorrow and suffering and meet the needs of those whose claims are the greatest and the most urgent. The great ideal of Magdalene to save souls for the glory of God continues to stimulate the Sisters all over the world and the two great models - Jesus crucified and our Lady of sorrows - constitute the spirit of the Canossian Daughters of Charity.

In order to extend charity as far as possible, they devote themselves to the apostolate especially in education, catechesis, assistance to the sick and deeds of charity to the needy. The Sisters conduct spiritual exercises (Retreats) to equip themselves together with the laity, adapting their services to the challenges and demands of the time. So they engage in teaching both academic and Catechetical programmes, visiting families, running orphanages, arranging schemes for 'Help the Aged' and assist associations like Sodality, C.C.W.I., Mission League and family prayer meetings and thus they reach out to people.