THE AUGUSTINIAN SISTERS OF THE MOST HOLY ANNUNCIATION 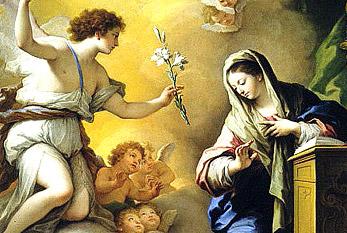 The ravages of war in the 16th century were innumerable. Between 1452 and 1455 there was a war among the Medici and Strozzi families for the supremacy of the city of Siena, supported one by the Spanish and the other by the French. The most notable consequences of the war were starvation and various types of epidemics, the worst being, plague. Dead bodies lying scattered in the streets were a common sight in those days.

It was Maria di Jacopo Fantozi, a rich and pious lady, who took the initial steps together with a few like-minded who co-operated with her into a community first. Later, as Superior of the first group of Sisters of the Order, she was entrusted with the duty to organise and direct all its activities by the Priors of San Giovanni Valdarno. Nothing much is known about Maria di Jacopo except that she was a widow and had a daughter. This daughter who later became Sr. Bartolomea was one among the Sisters who initially acquired the habit.

Filled with mercy and compassion, Maria di Jacopo set out to help the diseased and the dying. Drawn in by this selfless sacrifice, other ladies slowly started to step forward. They persisted in this work of charity for many years. Out of this their joint effort sprouted the Congregation of the Augustinian Sisters of the Most Holy Annunciation at San Giovanni Valdarno in the 16th century.

San Giovanni Valdarno initially was a castle built by Florentines in 1296 to defend their social, political and commercial interests. The fidelity of the castle remained constant through the 14th century, defending Valadarno territory against all claims of Florentine enemies. Now it is a city most developed socially and economically. Richness in works of art makes Valdarno also quite elegant and modern.

In the middle of the 16th century, the activities and services of their refugee centre faced a great crisis because of financial strains. Slowly their social and charitable life was compelled to be set aside and hence to concentrate on prayer and penance. Thus, spending much time in the presence of the Lord to whom they had dedicated themselves, their style of life gradually evolved into a cloistered one. For stability and for the smooth running of their life they adopted the rule and spirituality of St. Augustine with a particular devotion to Mother Mary venerated in the mystery of the Most Holy Annunciation.

Obviously it was divinely designed and at such an extreme situation, the Congregation, helped and guided by ecclesiastical authorities, transformed its life style. The records at the archives of various Bishoprics of Europe of the time depict the changed pattern as an exemplary model of prayer and penance.

Suppressive measures of civil authorities had thus compelled the closure of all old pious institutions but the norms of the Duke of Toseana, Peter Leopold, coerced the Congregation into continuing in the field of literacy for children. This development again, albeit oppressive then, could now be seen as providential. Though they had to adjust themselves to the heart-rending shift from cloistered existence, it served to sustain the slow and steady swing to the social sphere - teaching apostolate! Consequently, they assumed a new name - Conservators.

In 1808 came another period of difficulty in their life when emperor Napoleon stepped in with strange suppressive measures on all monasteries and religious institutions. In the beginning it was thought that following the decree of Napoleon they would have to close their monasteries like others. However they could continue in their activities on the privilege that it was an educational institution.

The Conservators faced yet another time of trial in 1867 when the Italian Government introduced laws to confiscate all the ecclesiastical properties which brought their institute under the vigilance of the Ministry of Public Education. The civil authorities tried to make it secularized and thereby state-owned. But the favourable attitude of the families and the goodwill of certain personalities towards the Sisters made them courageous enough to resist the moves of the government and enabled them to continue fearlessly in their activities.

This atmosphere guaranteed their religious characteristic in their apostolate of education and other missions of instruction. By 1925 many other cloistered communities from different places had joined them. In 1954 Holy Father Pope Pius XII approved this Community as a Pontifical Congregation. Gradually many other activities were incorporated into the institute and in 1964 the missionary activities of the Congregation were spread out of Italy when a House in Mozambique, Africa, was opened.

Eight girls from Kerala had entered novitiate of the Augustinian Order at Valdarno, Italy, in 1981 and after their formation and profession, the Sisters were remaining there. Discussions in their general chapter elicited the forethought on setting up a convent in the areas of the new Sisters from India. Through their mission in Mozambique, Africa, the Augustinians had co-operators in and collaborations with the Capuchin Community. The Augustinian Superior thus got in touch with Rev. Fr. Claudio, Provincial of O.F.M. (Cap) in Trichur, who, in turn offered assistance for the setting up of an Augustinian House in India.

The friendship between the Mothers General, Mother Pigolotti of the Augustinian and Mother Paolo Collotto of the Dominican Congregations, meanwhile, proved productive in initiating preliminary steps on exploring and examining possibilities and feasibilities of instituting a convent in India. Thus when Rev. Sr. Raffaela Casilli the Vicaria accompanied by Sr. Angelica, Counsellor to Dominican Sisters' House in India arrived in Cochin in 1986, they could be accommodated at the Rosary Convent, Palluruthy. Rev. Fr. Claudio guided them to a few places and then the Rev. Sisters paid a visit to the Ballard Bungalow, Fort Cochin, where the Augustinian Fathers had a House.

The next port of call naturally was the Bishop's House and entering the parlour was virtually like passing the portals of porte-cochere! His Excellency, Rt. Rev. Dr. Joseph Kureethara, extended a warm welcome to the Augustinian Sisters and a still warmer response to the purpose of their mission. Quite pleased with the developments, His Excellency offered the house at Thoppumpady briefly used by the Pallotines as a temporary abode for them. With encouraging experiences and heart-warming feelings from the Bishop and the diocese of Cochin, the Sisters returned to Italy.

The benevolent and beneficent bearing of the Bishop had touched them and their return to the Generalate was with the resolve to open their first House in the Diocese of Cochin. In the general chapter in July 1986, they had discussion on opening a House in India and they expressed favourable opinion. The General Council approved it. Rev. Mother Raffaella Casilli became the Mother General and she communicated the matter to the Bishop of Cochin through a letter sent on September 17, 1986.

Subsequently, the first group of Indian Sisters, Sr. Jemma Edayadil, Sr. Luisa Vattanirapel and Sr. Theresita reached Cochin, accompanied by Rev. Sr. Angelica di Pillo on December 30, 1986. The same afternoon when they called on the Bishop, His Excellency advised them to take the house at Santa Cruz School in Fort Cochin itself instead of the one at Thoppumpady. The Sisters stayed at St. Agnes Convent briefly until the said house known as Tharana was repaired and made ready for occupation. Thereupon they moved into Tharana on 19th January, 1987.

Inauguration of the first Indian convent of the Augustinian Sisters was with a Holy Mass celebrated by His Excellency, Rt. Rev. Dr. Joseph Kureethara on 20th January 1987. The first House in Cochin was meant to be a Formation Centre and aspirants started coming in to have experience in their Community life. The Sisters were enthusiastic in rendering an active part also in the parochial pastoral work - teaching catechism, making family visits, taking Holy Communion to the sick. After due preparation, three of the native inmates were sent to Italy in 1989.

Rev. Fr. Francis Kothakath O.S.A., Superior of the Augustinian Community, volunteered to help them in both the spiritual and temporal affairs of their new convent. He bought about three acres of rice field at south Palluruthy in June 1988 and did reclamation work. Foundation stone for their first convent blessed by the Bishop was laid on 28th August 1988 after a colourful procession started from St. Lawrence Church, Palluruthy, with lots of people, Priests and Sisters. Construction of the convent advanced and the work came to an early completion. The convent was blessed by His Excellency, Rt. Rev. Dr. Joseph Kureethara in 1991.

The essential element of the spirituality of the Congregation is charitable mission for Evangelization. St. Augustine says: "Love first, and do what you want". Every form of life of the Congregation is, therefore, directed to, from and in love. And deep in the Augustinian spirituality dwells the devotion to the blessed Mary, venerated in the mystery of the Most Holy Annunciation. The first Jerusalem Community is the model, on which St. Augustine wishes his religious Community to grow. So all the properties are considered common and shared by all. The concept of the Community is 'from each, according to his capacity and to each, according to his needs'. And the Superior is there to supervise 'from capacity' and to see to 'needs'.

They zealously participate in the pastoral activities of the parish. Teaching catechism, visiting families, taking Holy Communion to the sick etc. are some of their activities in the parish. Some Sisters are working as animators to lay associations like the Mission League, Christeen, Jesus Youth etc. In their field of work, the Congregation is not confined to the spiritual realm alone.

Since education is one of the main activities of the Congregation, they started an English Medium Nursery School in 1996. In 1998 they started a clinic in a building near their parish church. Moreover, with the generous help of some Italian benefactors, they have adopted more than 100 students from poor families to help them in their studies. With the collaboration of these benefactors and friends, the Sisters help in the construction of houses for the poor and assist needy girls reach the safe shelter of matrimony.